By Small World on December 4, 2010 in Ecuador Kayaking Trips

November 20th was our 1st Intro to Creeking course of the season and we had some awesome, gung-ho paddlers who were stoked to work on their creeking game! 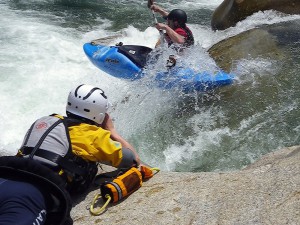 We boofed, we boat scouted, we eddy-hopped, we worked as a team, and spent the week fine tuning our creeking skills, and putting them to practice on some of Ecuador’s best Class IV- and IV creeks. 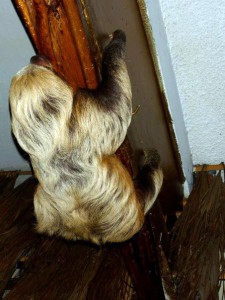 The topic of sloths also came up (after we saw this one) and there were lots of questions I didn’t know the answers too–such as “how long do sloths live?” I’ve done some research, so kick back and learn all you’ll ever need to know about sloths!

#1, Sloths in zoos have lived to be 40 years old, but scientists believe that 20 years is a more typical life span for sloths in the wild. 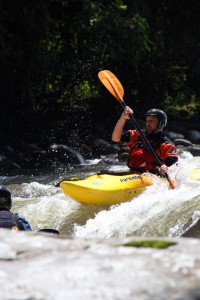 Sloth fact #2. Their fur, which often gets covered in a coat of blue-green algae during the rainy season, grows in the opposite direction of most mammals. Because sloths spend so much of their time hanging upside down, their hair grows away from the extremities to protect them better while they are upside down. Sloth fur, besides growing in a funny direction, is also special because it is a sort of small ecosystem. Because there is so much cyanobacteria (blue-green algae), sloth fur is host to a wide range of tiny, non-parasitic insects. Sloths have also been know to lick the algae off themselves to supplement their diet (which is mainly leaves, but some sloths do eat the occasional insect). 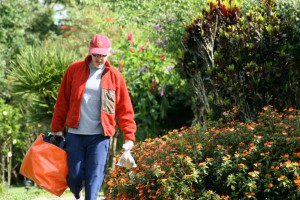 #3. As everyone knows, sloths are notoriosly slow. But just how slow…? On the ground, the maximum speed of a sloth is 6.5 feet per minute. They do much better in trees (when they can hang), moving at a max speed of 13 feet per minute. Perhaps the disparity is because they are adapting to the face pace of city-life, but I’ve seen the sloths in Tena move faster…I’ve seen them go at least 8 feet in 20 or 30 seconds, but then they do stop to rest afterwards, so maybe it all averages out! 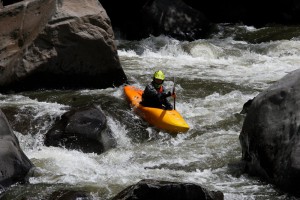 #4. The Jaguar, harpy eagle, and humans are the sloths’ top 3 predators. Sloths are nearly impossible to spot while they are in trees, and their most vunreable time is once a week when they climb out of their tree to go poop. Mainly they are more visable on the ground so would-be predators can spot them. 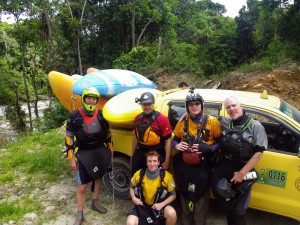 (From left to right: Damon, Craig, Ursula, Don, Guy after a great day on the Piatua. Not pictured: Midge because he was too busy “faffing about.”)

#5. Sloths’ great, great ancestors, the Giant Sloth, could grow to be the size of a modern-day elephant. Today’s sloth typically grow to be 2.5 feet in length.

#6. When Sloths have to pee, they usually wait until a rainstorm and pee from the tree while it is raining (don’t ask me how these scientists know this stuff)! Biologists believe they do this as a predation defense mechanism so they won’t give away their position in the tree by causing disturbances with their pee.

(Midge, Craig and Ursula taking a “scenery break” on the Upper Misahualli) 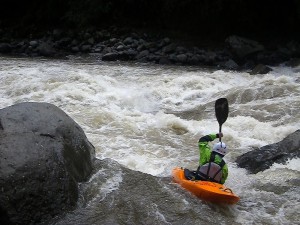 (Ursula putting her boof stoke to work at Gringos Revueltos)

#7. Sloths don’t actually “drink” water, but get all their hydration from dew drops on the leaves they are eating. 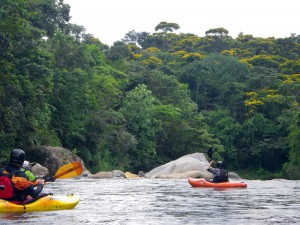 How many sloths can you see in the forest here…?