By Small World on January 11, 2009 in Ecuador Kayaking Trips
WELL, YOU KNOW YOU ARE DOING SOMETHING RIGHT WHEN YOU PADDLE THE LAST DAY OF THE OLD YEAR AND THE FIRST DAY OF THE NEW YEAR!
(Or, at least you know you have a kayaking problem)

Here is Chuck styling “Bobsled” on the Upper Misahualli. This is how Chuck spent his last day of 2008, boofing his way down a crystal clear river in Ecuador. Not bad Chuck.

We had a few different trips running over New Years, and here I am chronicling my and Tarquino’s trip. Don and Larry’s trip reports are coming soon, so for now, enjoy this one!

Daniel nailing the entry boof at Chibolo on the Cosanga River. This boof is key to your happiness throughout the rest of the rapid. Good work Daniel. (Oh, this is how Daniel spent his first day of 2009. While the rest of his buddies were probably hung over laying on the couch, Daniel was ripping it up on the rivers of Ecuador).

And, I have to keep throwing in the scenery shots, because people often forget, that besides being an awesome place to kayak, Ecuador is really beautiful too.

Anson is trying to make a few extra bucks by selling his helmet to these kids. He was thinking he might not have enough money for all the New Year’s tequila shots he wanted.

Here is Erica ripping it up in one of the best play spots on the Jatunyacu River (the Upper Napo).

Daniel on the same run surfing a big ass wave! You can barely see his boat and helmet here. Tarquino, Daniel, and I all walked back up to get this one and Daniel was the only one to actually surf it (little bastard)!

The next day we did the Lower Jondachi which flows into the Hollin River. We just like to keep people on their toes mixing it up between big water runs and technical creeks. Carrie is running one of the “too numerous to count” rapids on the Lower Jondachi.

Chuck is enjoying one of the numerous waterfalls on this run.

Anson on his way down to the Hollin confluence.

Damn, Chuck likes those waterfalls! Here he is soaking in a moment’s peace just above the biggest rapid of the day–“Waffleria.” This was one of the more memorable rapids of the trip…

Then…while we all tried (ok, most of us tried) to keep things under control, we did decide to go partake in a few of the New Year’s festivities around Tena. Don’t worry, it’s just the bad light making things blurry, despite valiant efforts from my fellow kayakers, I never did get this impaired.

At midnight (which I regret to say I did not make it up late enough to see), everyone burns their “muenecas.” These are mannequin dolls with masks on that are typically built to represent someone or something that their makers would like to see go away with the old year. So, for example, if you wanted to quit smoking, you might build a person smoking, that you would then burn at midnight, and waa-laa, wake up the next morning a new, non-smoking person! At any rate, there are a lot of things on fire come 12am in Ecuador!

Some of us might have been a little worse for ware the next morning, but everyone rallied to paddle. Here is Erica smiling with her new friends.

Tarquino showing off his boof stroke. 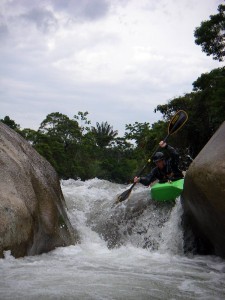 “I see your true colors shining through…”

Sometimes in Ecuador it rains…and then we get big water…Upon our return to the Quijos Valley, we had a little rainstorm. We have a large gauge boulder in front of our lodge. When we put in for the El Chaco run on Friday morning it was 0 on our gauge (a fine low level for the run). As we went downstream, every side creek was coming in a little bigger, and a little bigger. At Sardinas Grande we all had to decide if we wanted to pull the plug and get out, or press on into the canyon. We all decided we would press on, be aggressive, and charge through those big waves. When we got to El Toro, there were some big waves alright! Can you find the wee little kayaker in this photo?

Here is Anson in Olympic Trials at the bottom of El Chaco Canyon. He was one of the naughty rule breakers here…shame, shame. But, all was well in the end. We made it down to the Oyacachi Confluence with a group full of happy paddlers. By the time we got back to our lodge our gauge rock, which goes up to IV, was completely underwater and Megatron was coming in (a very large feature that only exists at REALLY high water). Way to rally crew and paddle an amazing run despite the raising water! It was great starting off 2009 with you all. May your year continue to be great!
Parting Shot:

Sucks to have a monkey on your back