For our last week of the season we had a big crew from Alberta, British Columbia, Saskatchewan, New York, and Connecticut. Don got so excited to have such a great group that he was just loopy.

Saskia, representing BC, is here spinning around in Don’s hole on the Lower Quijos. 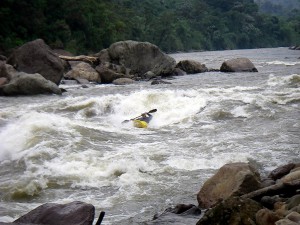 Don Beveridge, ripping up Darcy’s Wave on the Lower Quijos. We had a great level–20.5 on the gauge–which makes for some epic surf waves. The best part is, at this level, Gringos Revueltos is washed out, so instead of stressing out about big holes, you just get to enjoy some HUMONGOUS waves–yes, even bigger than this one here if you can believe it.

Keegan, showing off how well the Bliss Stick Scud can surf. 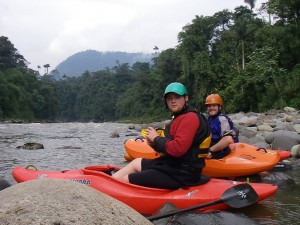 Here are Keegan and Jimmy, stretching their legs and taking a little time to relax on the Quijos River.

On a high water run down the Upper Cosanga, we saw these dudes skillfully using the cable crossing. They are working on replacing the bridge here, but in the meantime they hook themselves up to this cable via a rope harness, clip into the pulley and start pulling. Not sure who was having more fun.

Then we went to Tena…Chris here is splashing off after a muddy, but entertaining hike into the Lower Jondachi.

Saskia and Curt also chilling out after the hike in, and getting prepared for the 15 miles of paddling ahead. 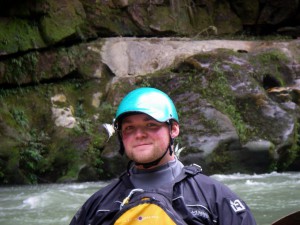 Jimmy seemed to be very attractive to the butterflies on the Jondachi. If you look closely, you’ll notice 2 on him–1 on the right side of his helmet, and the other on his neck. These white and black butterflies followed him for the first hour of the run!

Ben checking out the first waterfall of the day. 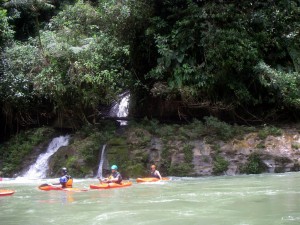 Yeah, they don’t call this the land of the waterfalls for nothing! 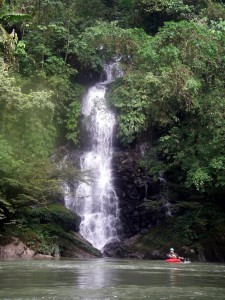 Jimmy at the base of the waterfall just above the biggest rapid of the day–Belgium Waffle, aka Follow Don if You Want a Beat Down (just ask Curt about this). 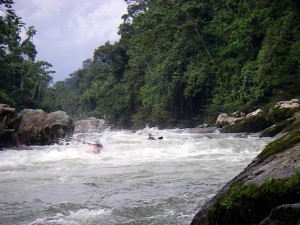 Here we are in Belgium Waffle, or F.D.I.Y.W.AB.D hmmm, it doesn’t make such a good acronym.(

Connie punching through “Hatless Hole” on a high water run of the Jatunyacu. 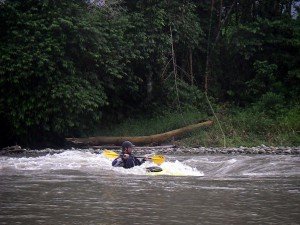 Curt ripping it up in one of the many play features on this run.

Ben surfs the Ammo on the Jatunyacu (also called the Upper Napo). This river confluences with the Mishualli just about 20 miles below this surf wave. Further down it is joined by the Quijos/Coca, then flows to the Maranon and becomes the Amazon… 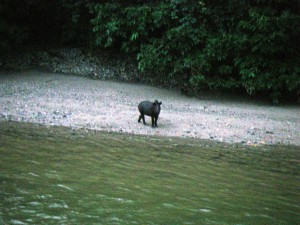 One evening while having happy hour on the porch of our hotel in Tena one of those wily Canadians spotted this Tapir in the river down below us. It was a first for me as far as wildlife sightings go, and we got to watch this little guy while we finished our Pilseners in the twilight. What a way to finish off a great day of kayaking. 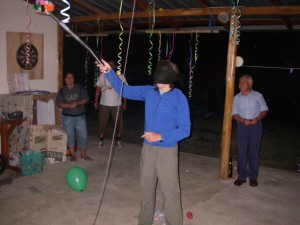 We returned to our lodge to find that Lily, Rosa, Memo, and Eduardo had secretly planned an end of the season party for us. Complete with pinatas and all.

I was selected to be the one to hit the pinata–I mean, I was the one selected to put a blind fold on and wander around looking like an idiot swinging a stick around my head. 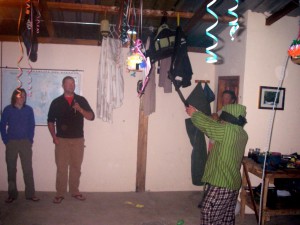 Then, Ben volunteered to be the idiot with the stick! But at least he is sporting a stellar outfit. (Ben, I am just making fun of you because I know you read the blog and I know you can take it! Thanks for being such a good sport). 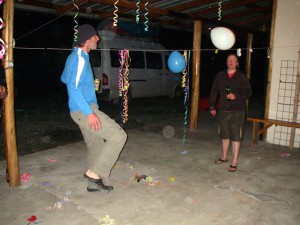 At the end of the evening, fun was had by all.

Thanks to everyone who paddled with us in 2007 and 2008. It was a great season, with tons of fun paddling, and many fun evenings at the lodge. I hope you all will have as fond of memories as we do of kayaking in Ecuador! 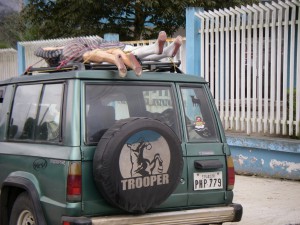 Well, this is certainly something you don’t see everyday. It looks like a bad scene out of a Chevy Chase movie or something…But it did provide some good entertainment on our way to the Cosanga River!