Yeah, so this is totally not a Class III rapid…Sue is boofing “dispensable Enson” on the Piatua River.

January 23rd we had a group of 3 people on our Class III trip who were all a lot better than they gave themselves credit for! We ran a really sweet itinerary of Class III and IV that included the Quijos, Cosanga, Piatua, and Jatunyacu. 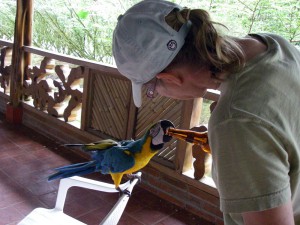 Sue again but this time she’s abusing the local animals–Sue, stop getting the Macaws drunk!

Martha, styling the line at Sabado Gigante on the Piatua River.

Some Cuckoos I saw at the Piatua put in. Yeah, sorry, I’m on a cuckoo kick right now.

Martha and her fan club